STEM. As English majors, many of us are probably used to hearing this field like it’s our older, cooler brother that we will never live up to. There undoubtably exists a hierarchy of fields to study and work in. In my opinion, here’s a solid (albeit unfortunate) representation (excuse the language in it, though; I just found it!): 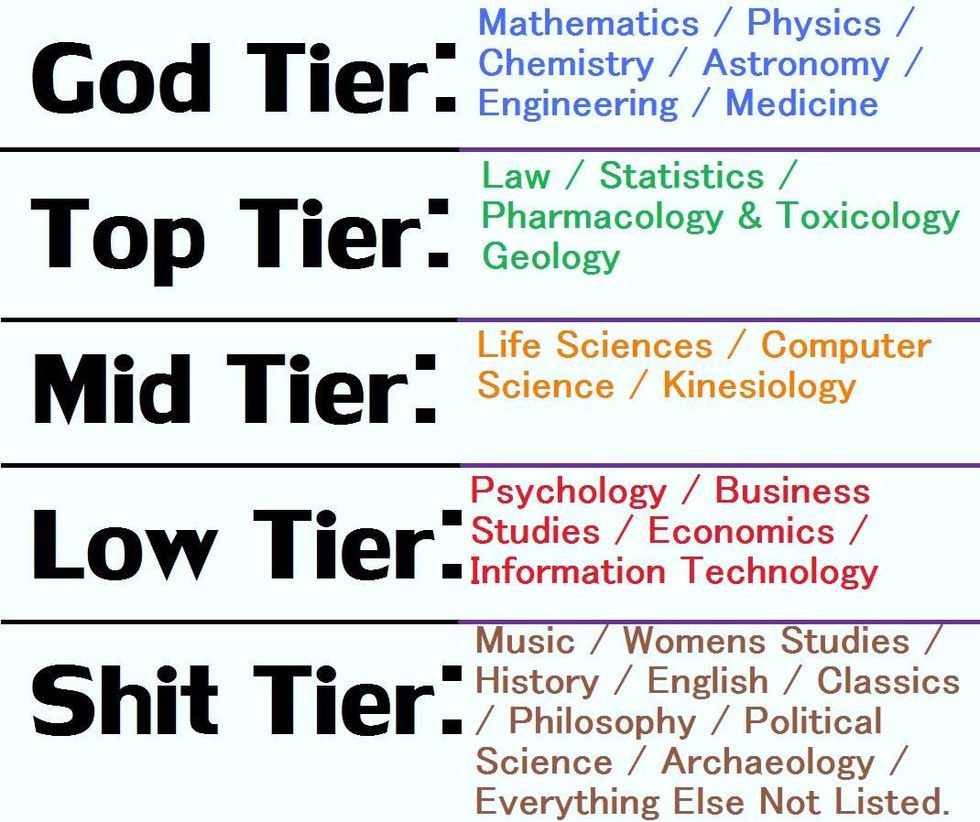 I’m interested to see if people agree with the way this hierarchy is laid out. Personally, I was surprised to see Business Studies and Economics so low. This observation leads me to my point: while everyone has their own view of each field’s value (everyone has their own “hierarchy”), what discipline almost always seems to be coming in strong at the bottom?

Many English folks who feel the same way take a stabbing at STEM. “Put the STEM people in their place!” raged one of my friends. Don’t get wrong: I understand the frustration that is clearly fueling remarks like this one. It’s tiresome to routinely feel under-appreciated by society, especially people closest to you. For instance, your uncle at Thanksgiving who gives you the “…oh…” look when you remind him what your major is, your bio major friend who laughs at you for thinking that your homework is so hard, and maybe one of your parents who urged you to reconsider and proceed with caution as you declared your Lit major.

While these back-handed compliments and condescending storm clouds follow us, allow me to argue that it is important to not let these get to our head. The worst thing we can do? Give flack right back to STEM. Society needs everyone’s talents to function holistically, and that includes the dear humanities…and yes, STEM! Though hierarchies of all the fields (like the one above) are everywhere, they ultimately are propelling the issue of competition between disciplines. Only when we realize every field exists on equal grounds is when our society will function at peak performance. The more people bash the humanities, the less students will want to study them, so the less we will see new books, music, art, and media.

Let’s learn to embrace each and every discipline and try to make efforts to diminish the hierarchies that exist inside our own heads. In fact, doesn’t it get tiring having to argue all the time?

(Oh, wait…we can vouch that is does. After all, how many argumentative essays have we composed? I know I stopped counting.)

In the beginning weeks of this course we read the novel, The Information by James Gleick. I’d like to express how absolutely interesting the book was to me as it opened my eyes to aspects of information, communication and information theory that I have never thought that in depth about before. For the purpose of this blog post, I want to focus on the communication aspect of the book. The book states, “as communication evolves, messages in language can be broken down and composed and transmitted in much small sets of symbols” (Gleick 74). Specifically, my focus here is on symbols and language. When reading this book for class, I immediately related it to another course I am taking, American Sign Language (ASL). ASL is essentially replicating the English language visually, by the use of symbols. And, these sets of symbols are essentially the way deaf people communicate. So, my question, how has it evolved? Well, we have learned how much language and different forms of language or ways of communicating has transposed and changed in the book. For instance, the African drum, the language of telegraph signs (oh wow, signs…American sign language), etc. These were all ways of getting information, or communicating that information, from one point to another.

We know from the book, “the language spoken in one valley differs from the language spoken in the next” (Gleick 73). Meaning, the language spoken in one area, is not the same in another area. Let me first compare this in a simple way. Coming to college you meet people from different areas of the state, country, world etc. One difference, although seemingly small, is very representative of the differences in communication, or language, from “valley” to valley”. A friend of mine referring to soda as pop. I had no idea was pop was, a lollipop? Well, where she is from, pop is what they refer to what I refer to soda as. In comparison, in sign language, different areas have different means and ways of communicating. One sign may not be the same sign in another area. The broader sense of this would be the difference in American sign language verse French sign language. There are many different variations of signs. However, amongst those broad categories or country signs, are individual forms of actual sign language that differs. Kind of like how amongst our language of English, as individual ways of the world evolve so do certain aspects of the language and communicating. What does lit mean? One may think you lit a fire at one point in time, however, it has evolved as a word to mean something else, the word lit now holds an additional connotation and means awesome or fun. (kind of weird right?!). Sign language has that as well. Different areas and people have various means of their way of communicating. You can communicate in American Sign language, Pidgin Signed English, and Signed Exact English. Three forms of sign language that are used across the US. Even then it can be broken down further, there’s something called the Rochester Method of sign, which is finger-spelling every single word (even though in other forms there may be a simpler way to say that word (an actually symbolic sign)). Just like the Rochester method has evolved over time, so has our language and communication! Texting, and blogging and tweeting and messaging. The finger-spelling method of sign language transitioning to the more symbolic simpler sense of it relates to our English language evolving to some of the slang we use. So, in thinking of that, what do you notice about other people’s language? Does it differ than yours mostly or just in small areas? Let’s think of locally, then state wide, then the northern part of America verse the southern part of America, then even broader to different countries. It is so interesting to actually think about. So, to end this blog, I’d like to leave you with another quote from James Gleick “everyones sense of language differs and no one’s can be called standard” (Gleick 72). Enjoy!

As an education major, I feel as though I’ve been trained to detect the significance of assessment format in all of my classes. Similarly to a professor subconsciously thinking every small movement in their crowd of students is a raised hand, I’m conditioned to notice how my classes are being assessed. Do we have quizzes every week, an oral presentation, a group project, and a final? Do we just have a midterm and a final? Do we have weekly discussion posts with the opportunity to miss three?

While some may look at a course syllabus, shrug, and save it to the deep dark abyss of their Downloads folder, the standard education major likely gets out their magnifying glass instead. We consider how we are being assessed and if these assessments adequately test knowledge and understanding across the board for all students. Everyone has different strengths in the classroom. The quiet kid could tank a solo oral presentation, but they could earn the highest grade on a cumulative paper test. “Smart” does not have one profile. Therefore, it’s important to consider the ways in which students are being asked to demonstrate their skills.

Okay, so now that I’ve used my soapbox for preaching, allow me to step down and actually get to my point. I really enjoy the opportunity to blog in our class. We get to blog…for a grade! Blogging is a way of writing without feeling like you’re getting an unwelcome flashback to your English Regents: you know, the one where you’re sitting in that sweaty classroom writing so fast you think your fingers will shrivel up. Blogging is accessible because it’s on WordPress: an online platform available anywhere; a fact that, in my opinion, masks the daunting feeling of writing an essay. We’re writing to a similar word count, and we’re still expected to maintain the standard conventions of English grammar, yet we’re invited to write colloquially. Like we’re having a conversation. With as many. Paragraph breaks. As we want. This doesn’t sound like a standard “assessment” to me…gee, I think I even forgot what that word means.

A list of benefits of classroom blogging could extend as long as the line in Cricket’s on a Sunday morning. It exercises student creativity, promotes self expression, promotes interaction, keeps uptake task of regular writing, improves communication skills…

On that note, a bagel and cream cheese sounds pretty good right about now.